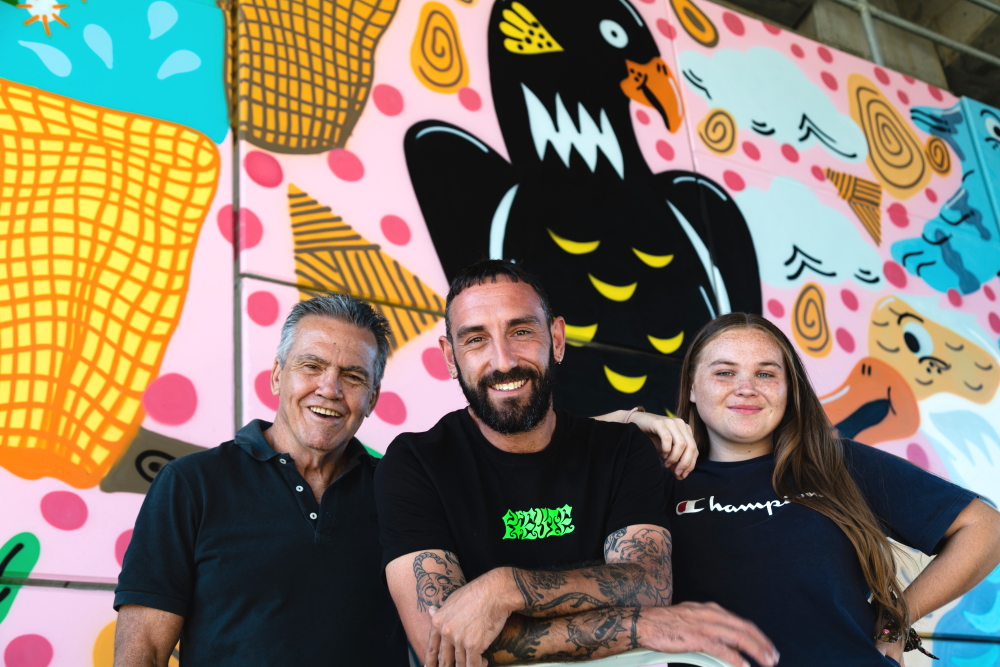 Stories of fishing, black swans, and local Aboriginal heritage are now on show in the newest public artwork in the city, the Karrara Bridge mural.

“This new mural features and celebrates the character and identity of the Dapto area through its colourful depiction of black swans, birds, wattles, dolphins and other points of interest to the Aboriginal people of the area,” Wollongong City Lord Mayor Councillor Gordon Bradbery AM said.

Prior to starting work, the mural artists spoke with members of the community and local Aboriginal community organisations and groups to learn of the area’s importance so these could be reflected in the artwork.

Mr Geurin said the main ideas emerging from the workshops and consultations were around the rich history of Mullet Creek and its importance to the Aboriginal community.

“Community members told stories of native plants and animals, such as how the wattle tree can tell us when certain animals are coming into the area,” Mr Geurin said.

“This became important for us to incorporate in the design, as well as ideas playing off farmland and local produce. By using bright and playful colours in the mural we captured the happy and uplifting spirit that came through from talking with local students.”

The Karrara Bridge mural is a contemporary and colourful public artwork, one of more than 130 public artworks throughout the city.

“I was brought in to talk with Mitch about incorporating some indigenous design into his overall concept,” Warwick Keen said.

“I think he’s been able to pull that off really, really well. The indigenous perspective is there. You’ve got your landscape, your seascape and a little bit of reference to the postcolonial history. Basically, it comes back to nature and the work exudes that. You’ve got your native animals and your introduced animals which are all part of what Dapto is now.”

Young Coomaditchie artist Jess Brown said the best part was the experience she learnt from working with Mitch.