It has been many years in the planning and from Tuesday 28 April Wollongong City Council’s largest infrastructure project – the new Karrara Bridge – a critical piece of infrastructure for West Dapto will be open for all community members.

This project, while still being finalised, is expected to cost $71 million.

Deputy Prime Minister and Minister for Infrastructure, Transport and Regional Development Michael McCormack said the new bridge was a vital part of the Fairwater Drive to Fowlers Road link project.

“This is a great example of how the Australian Government’s investment in infrastructure nationwide is setting the foundations for economic recovery on the other side of the COVID-19 pandemic.”

Assistant Minister for Road Safety and Freight Transport Scott Buchholz said Karrara Bridge provided the residents of West Dapto a new link between Fairwater Drive and Fowlers Road that would not only improve access during flooding events but also allow for future growth in the Illawarra.

“Thousands of people are expected to use the new bridge each day, improving commute times and reducing congestion on other roads,” Mr Buchholz said.

Minister for Families, Communities and Disability Services and Member for Kiama Gareth Ward welcomed the spectacular Karrara Bridge, saying it will provide a vital new link for Illawarra’s road connectivity.

“Karrara Bridge provides the residents of West Dapto a new link between Fairwater Drive and Fowlers Road that will not only improve access during flooding events but also allow for future growth in the Illawarra,” he said.

“Thousands of people are expected to use the new bridge each day, improving local access to schools and facilities, reducing commuting times and reducing congestion and through traffic within the Dapto town centre.

“I congratulate Wollongong City Council on delivering this vital infrastructure project which has been supported with more than $25 million from the NSW Liberals and Nationals in Government.”

“This major link project has been a desire of the community for many years,” Cr Bradbery said. “We’re pleased to deliver this major project on time and on budget. One of the things that makes me particularly happy is how community members and students from the local high school and primary schools also have been involved in its development.

“This complex project has been many years in the making and I appreciate the local community’s patience as we built this essential road link and bridge.

“This is a major piece in Council’s efforts to make West Dapto more flood resilient. It is part of the West Dapto access strategy which ultimately will be put in place to service this growing part of our City. As funds become available other pieces will be progressed so we invite the State Government to continue to work with us to deliver outcomes such as this.”

West Dapto is one of the largest urban land release areas in NSW and the delivery of this crucial road connection is a significant milestone.

The project was funded by:

The Fowlers Road to Fairwater Drive project including two bridges has been completed on time and on budget. The infrastructure project began in mid-2017. The project includes a: 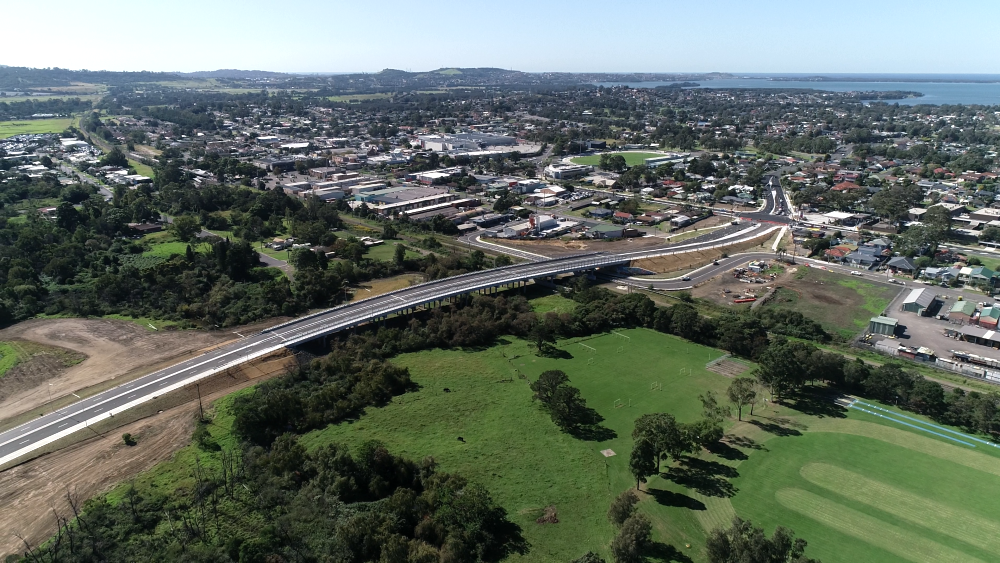 Interesting info on the road link: