Since the time of creation, Aboriginal people have had a deep connection to this landscape, the escarpment, the flatlands, the coastline and the waters. Ceremonies of storytelling, song and dance, initiation and burials have been performed here from that time until now. It is through this continuity that Sandon Point place and space is recognised and revered as highly significant and sacred.

We ask that you respect this connection and tread lightly as you pass through or engage. The story, the song and the spirit of this place is strong and enduring.

Precontact, Sandon Point was a gathering place where the Aboriginal peoples from the north, south and west would meet to conduct important business. The presence of littoral rainforest and coastal eucalypts supported this, providing people with the required nourishment and medicines, and resources to construct tools, canoes and sacred objects.

The native flora and fauna of this area has been impacted greatly since colonisation and settlement. Since the site's Aboriginal Place declaration in 2007, dedicated bush regeneration by the Illawarra Local Aboriginal Land Council, in partnership with Wollongong City Council, has seen the rejuvenation of the site through the widespread removal of invasive species and reintroduction of a number of native flora, such as lomandra, blue flax lily, austral rush, tall sedge, waraburra, golden guinea vine, pigface and warrigal greens. This regeneration is culturally significant to the protection and healing of this sacred site.

In 1998, large seas unearthed a skull within the sand dunes of McCauley's Beach. This archaeological find was identified to be an Aboriginal man of significant cultural status, dated at 6,000 years old.

This ancient relic became an impetus for local Aboriginal activists and community volunteers to form an alliance and resistance to the development and desecration of this sacred site. The Northern Illawarra Residents Action Group (NIRAG) helped establish a Community Picket at the end of Hill Street in support of the Sandon Point Aboriginal Tent Embassy (SPATE) which was built behind the dunes where the skull exposed itself.

A campaign to protect the site followed including radical action, extensive court cases, and state government interventions until in 2007 the site was declared an Aboriginal Place by the NSW Government. Today, this area is protected by the National Parks and Wildlife Act 1974.

Please note, this map is provided as a general indication only. 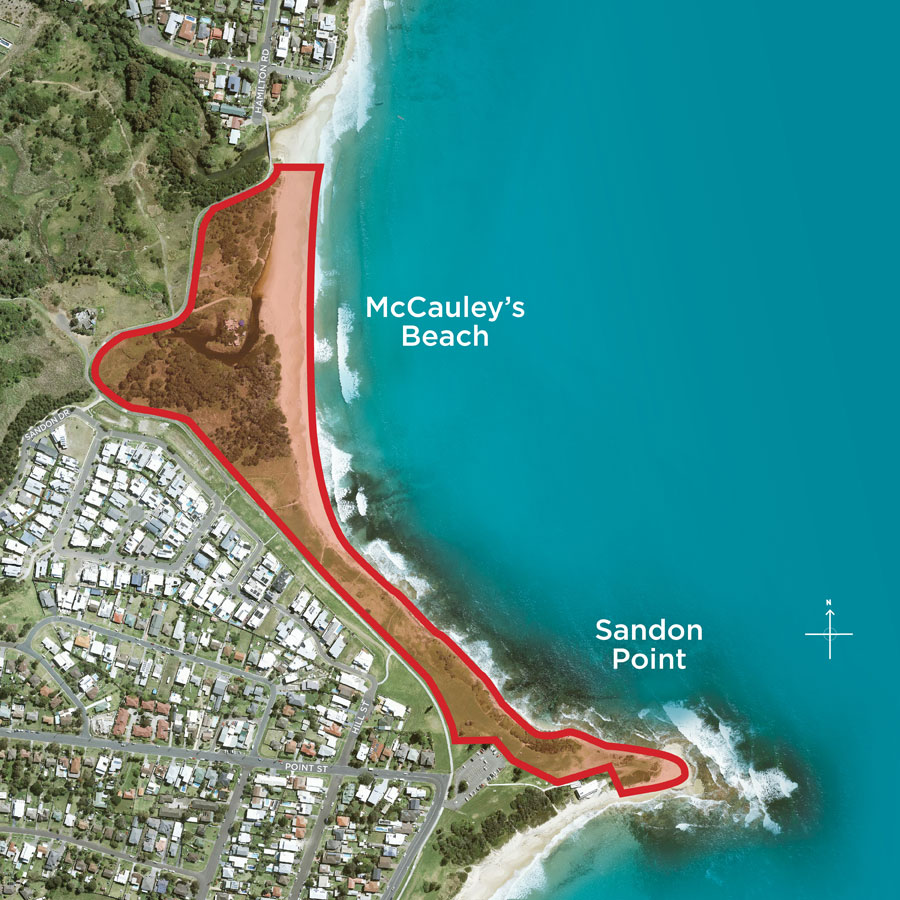 Plans of management and related documents