Austinmer is a coastal suburb in the northern part of the Wollongong Local Government Area.

The area now know as Austinmer was originally called Sidmouth, after the name of the house built there by Robert Marsh Westmacott in 1837. Sidmouth was the name of Westmacott's hometown in Devon, on the Channel coast of England. Like its English namesake, the area became a seaside resort.

By the 1860s a small rural settlement had developed in the area and was called North Bulli.

The name changed to Austermere with the opening of the North Illawarra Coal Company's mine. As Sir John Leckey's estate at Moss Vale was also known by this name, the spelling Austinmere was adopted by the local newspapers in 1887. The name linked to Henry Austin, one of the three Directors of the Board of the Illawarra Mining Company.

When the railway platform was built in September 1887 the name Austinmer was placed upon it, omitting the final 'e'.

The name Austinmer was officially adopted in 1895.

The first known land grant in this area was made to Cornelius O’Brien in 1821. This grant was in the Bulli area, north of Wollongong, and extended to the Austinmer area. It became known as North Bulli.

Captain Robert Marsh Westmacott made the acquaintance of Cornelius O'Brien and journeyed to his property to discuss the purchase of three properties held by him.

In 1836 Westmacott applied for and was granted three hundred acres where Austinmer was eventually established. In 1837 he constructed a large house which he named 'Sidmouth' after the town in Devon, England, where he was born. By the middle of that year he brought his wife and two sons to live in the finished house.

Westmacott was allotted a number of convict labourers with his grant and with these he quickly cleared the land for his house and cultivation. Westmacott also bought land north and south of his grant, mainly as investments. He used his North Bulli property for raising horses. He disposed of his Woonona property in 1841 and his Thirroul and Austinmer properties in 1846 and went to Parramatta to live.

The original ‘Sidmouth’ house stood for more than 90 years and was demolished in the 1920s.

James Hicks' grant of 50 acres adjoined two of Westmacott's blocks which he had purchased from O'Brien. When Westmacott's estate 'Sidmouth' was sold in 1843, it was bought by James Hicks who moved into it with his family.

Hicks had two sons, Henry Thomas and Richard, and some daughters. The Hicks farmed the land near the house and founded an orchard on the higher ground towards the cliffs. James Hicks subdivided the 300 acres he took over from Westmacott into farms and orchard lots of 40 acres, bringing families to the areas with the sole object of creating farms and orchards.

The earliest of these families were the Fords who grew oranges, the Carricks who grew grapes and apples, the Dalys who grew vegetables and fruit, the Mitchells, the Maddens and the Hopewells who carried on farming. By the 1860s other families in the area included the Powell family, the Geraghty family, the Kennedy family and the McPhee family.

James Kennedy with his wife and five children, a boy and four girls, came from Yallah and occupied a grant of land made to Joseph Roberts of 160 acres, adjoining Westmacott's grant on the south.

In 1867 James, with three others, was elected as a Patron on Board to establish a school under the National Education Board, at North Bulli, after considerable negotiations.

On the death of the parents the farm was run by their son Patsy, and the girls, the latter making butter as well as helping in the field sowing corn and lucerne. None of them ever married and Patsy, in his 80s in 1905, was gored by a bull and killed, leaving the girls to handle their affairs. The property was eventually sold for 3000 pounds and the girls provided for in Thirroul.

Coal, salt and blackberries put Austinmer on the regional map in the 1880s before it became a holiday and health resort in the early 20th century following a large land sale.

In 1889 the Illawarra and South Coast Tourist Guide, referring to Thirroul and Austinmer, said the district was known for its regular supply of blackberries to Sydney. This went on for about 20 years before the vines were eradicated (Illawarra Mercury 18 October 1984 p.21).

In 1884 the 'North Illawarra Coal Co.' was formed and started mining operations at North Bulli (Austinmer). By 1886 it was producing coal. During that period, the site of the mine was selected by Mr D Moresby, a colliery manager from Yorkshire, England, and on 18 November 1884, the Illawarra Mercury states that the tug "Despatch" was taking soundings off Hicks Point in connection with the jetty intended to be erected there. By 1 January 1887 the jetty was erected and put to use for coal shipping.

In 1895 the mine was worked out and subsequently closed. The jetty was later partly wrecked by a storm and the remainder was destroyed by fire in 1915 (Illawarra Mercury 18 October 1984. p.21).

The Austinmer railway station was opened to traffic on 1 September 1887, bringing with it workers and their families (King, Norman S., 1967).

The Clifton to Wollongong section of the railway was constructed while the tunnels at Helensburgh and Otford were being completed, connecting with Waterfall and Clifton. Until they were finished, coaches ran between the two, but the steep drag uphill at Stanwell Park meant passengers had to alight and walk up.

Tracks were used to drove cattle over land and a track down the cliffs was discovered at Wombarra. There were also tracks leading down to the delightful glen and beach of North Bulli.

In 1884 Robert Marsh Westmacott discovered and surveyed a new road up the pass. It was built with government and local citizens' support, and eventually became known as Bulli Pass. It was not until 1886 that a wheel vehicle was taken up.

In 1887 the Austinmer Railway Station was opened. It is located south of the rail line in Austinmer. A second platform with timber railway platform building and corrugated metal roof was added with 1915 track duplication. The Railway Station had an important historical and social link with the township of Austinmer's development and the development of the tourism and the coal industry (City of Wollongong Heritage study Vol 3/5). 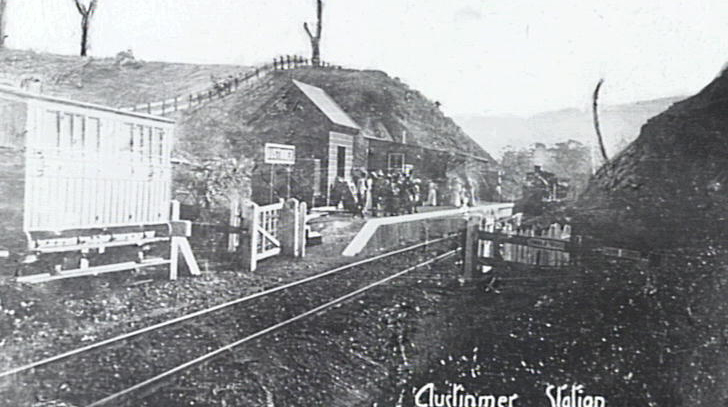 This house is a 1920s Californian bungalow. It was built of brick with a corrugated iron roof and a symmetrical façade with leadlight bay windows. It is an excellent example of local interpretation of the Inter-War Californian bungalow style with a high level of integrity (City of Wollongong Heritage Study Vol 3/5). 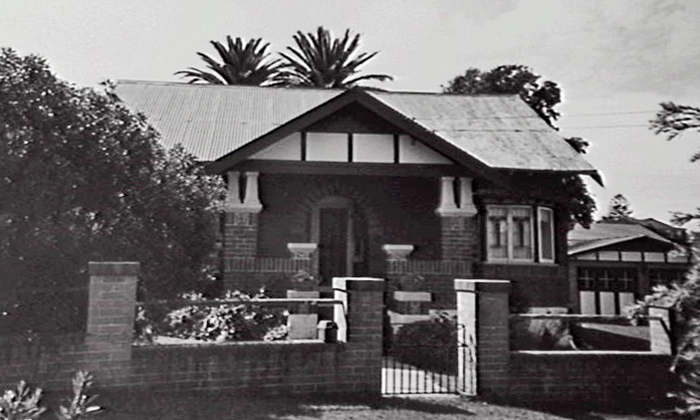 The first move towards the establishment of a public school at Austinmer, then known by the name North Bulli, was made in 1866. In 1891 the old slab school was demolished. The new building was made of brick, after it was found that white ants were destructive to wooden buildings. The school was originally one large room divided by an arch. Eventually a partition was installed to separate the space into two rooms. In 1927 a third room was added. A modern classroom block was added in 1958, followed by another classroom, library and brick veneer office in 1963. It is a fine example of a late Victorian school building and is still in use (King, Norman S., 1967). 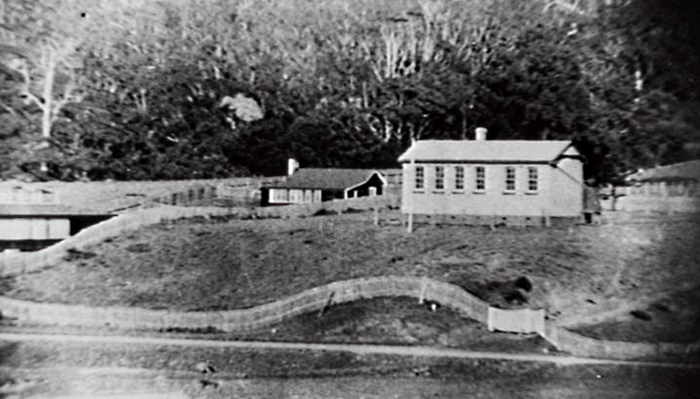 This former prominent building on the headland was in the late Federation Bungalow style. A former salt mine once operated from this site. The original building was a guest house constructed by Joe Goss for Syms and Company in 1926. It consisted of 30 double bedrooms, spacious landscaped grounds, 12 garages and staff rooms. In 1954, a new accommodation section and bars were added and the guest house became a Hotel.

The older part of the Hotel was set prominently on Brickyard Point, with palms and pine trees forming a landscaped setting. The building had detailed brickwork and lead lighting (City of Wollongong Heritage Study, 1991).

The original structures no longer exist on the site. A new building opened in 2016 which currently operates as Headlands Austinmer Beach. 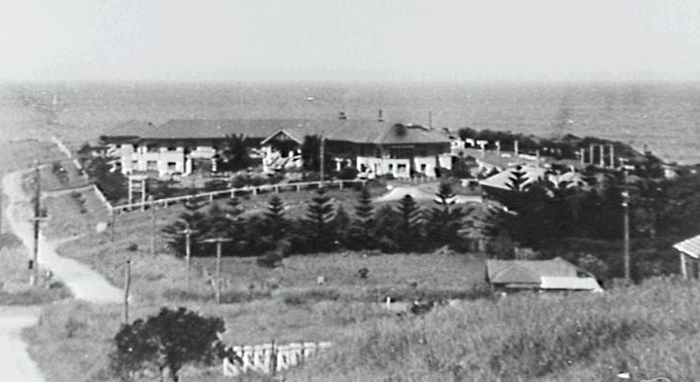 This split level house is rendered brick with curved features highlighted by dark painted edging. It is an uncommon and fine example of the Inter-War Functionalist style in a domestic style. The building is set in a prominent position above Glastonbury Gardens and displays many intact features of this building type. 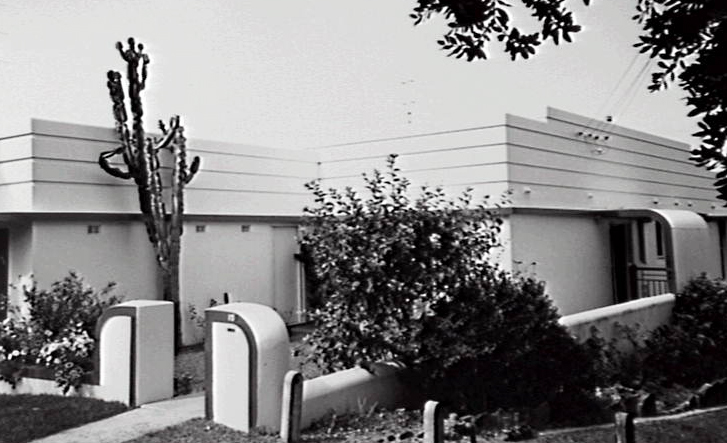 Austinmer lies between a magnificent coastline and the backdrop of the Escarpment. It is framed by rocky headlands to the north and south, and surrounded by fragrant Norfolk Pines. The pines are located at Austinmer beach. They are a group of Araucaria heterophylla approximately 40 years old and they provide a landmark and reinforce the identity of beaches.

Some of the animals found around Austinmer are the Sooty Oyster Catcher (an endangered species), reptiles, parrots, possums, frogs, snails, numerous arthropods and other invertebrates.

The Glastonbury Gardens, located on Lawrence Hargrave Drive, is a public park containing mature Phoenix canariensis, Sabal palms, strelitzia nicholai and Araucaria heterophylla. This was previously the site of a colliery dam which is still visible. The park is a focal point for community events.

Do have historical information, family stories or photographs of Austinmer ?