Balgownie is located to the north west of central Wollongong, in the foothills of the Illawarra escarpment.

The name Balgownie was used from the time of the first land grant to John Buckland in 1835. However before the discovery of coal in the area in 1861 early settlers used place names shown on old maps and documents such as Cramsville, Ousley-vale and Ryanvale.

A grant of 1920 acres, made to John Buckland on 11 July 1835, was named Balgownie in the Grant Records. Governor Bourke granted this land in virtue of a promise of a grant made by Governor Darling dated 11 April 1829. It was located north of Campbell's grant at Geard's Hill.

In 1839 the property was subdivided into 32 lots of 10 and 80 acres each. Four farms were offered for sale in 1840, and the village lots were advertised in 1841. The village that was established became known as Fairy Meadow and the coal centre nearby was given the name Balgownie (Lindsay, 1994; Ryan, 1984; Northern Leader, 2002).

In 1850 James Cram arrived from Newcastle-on-Tyne to find employment in the Mount Keira coal mine. He acquired 36 acres in the heart of Balgownie. In 1866 he became the Under Manager of the Mount Pleasant coal mine. He played a major role in developing this mine into the biggest coal mine in New South Wales at the time. James later disposed of some small building sites; these were the first to be sold in the northern district. He also built small cottages and rented them to local miners. This small settlement became known as "Cramsville".

James Cram was prominent in the local council. He established the first grocery business in the estate and he was also a government inspector. In 1888 the railway station at Fairy Meadow was named Cramsville platform. James was married twice, firstly in 1853 to Sarah Hedley and secondly in 1866 to Alice Frost. He had 17 children and many of his descendents were Illawarra pioneers.

Patrick Lahiff was the manager of the Mount Pleasant Colliery. He was born in the County of Limerick in Ireland in 1824 and arrived in New South Wales in 1829. He was a stonemason by trade and won the contract to build St Michael's Church of England and its parsonage in Wollongong.

The greatest contract that Patrick was awarded was for the construction of Belmore Basin which was opened in 1868. Patrick Lahiff was so well known that residents entitled the project 'Lahiff's Dam' before its official naming as Belmore Basin. In 1861 Patrick Lahiff opened the Mount Pleasant Colliery with land he acquired in 1861 in partnership with a Mr Fawcett. For 27 years he managed the colliery. He is also believed to have manufactured fire bricks in the Mount Pleasant area, as well as experimenting with a blast furnace using ores from Mount Pleasant.

Patrick was married twice and had children from both marriages. He died in 1897 and is buried in the Corrimal Catholic Cemetery (Illawarra Mercury, 2001 p.15; Wollongong Advertiser, 1992).

John Madden was 11 years old when he arrived in Australia. He married Johanna Gallagher in 1863 and they had eight children.

John Madden had a notable career as a diver and was involved in important salvage works in the Illawarra.

In 1883 John and Johanna purchased the homestead 'Balgownie'. The homestead was originally the quarters of the officers in charge of the convicts. The stone pavements that formed the floor of the wide verandahs on three sides of the homestead were brought from Parramatta in Bullock drays by convicts over Rixon's Pass near Bulli.

The early settlers in Balgownie had orchards and farms. In 1853 John Ryan purchased land in the Balgownie Village Estate where he established an orange orchard. He sold oranges locally and also to Sydney. In 1889 Ryan's farm of 70 acres was divided into 121 allotments varying in size from half an acre to six acres. It was advertised in the Wollongong Argus as having "splendid soil for gardens and orchards, you can keep your families in all vegetables." (Wollongong Argus, 12 January 1889).

The Murray family had a farm at the bottom of Church Street. The farm was then known as Walkers and was bounded on the north by Cabbage Tree Creek, on the east by Caldwell's Lane (now Napier Street) and on the south and west by houses in Hunter Street. Cabbage Tree Creek was important as the water was used by Murray's Orchard and market garden, Duncan's Farm, and also by the Caldwell Brother's farm (Ryan, 1984; Kuemmel, 2001).

The development of Balgownie resulted from the opening of the Mount Pleasant Coalmine in 1861. Until its closure during the depression years of the 1930s the town and its residents were dependent on its operations.

The mine was situated on the slopes of Mount Keira approximately three and a half miles north west of Wollongong Harbour. The owners were the Mount Pleasant Coal Company and the mine was opened by Patrick Lahiff and Benjamin Fawcett in July 1861.

A good description of the mine was given by the Illawarra Mercury in 1876: "The entrance to the mine is at an elevation of 650 feet above sea level; the main drive runs in a general north-westerly direction for upwards of a mile, and for three-quarters of a mile from the outlet falls 140 feet. The seam averages fully seven feet in thickness of clean coal, with a lustrous appearance, free form bands or refuse, rolls and dykes occur in places, but no obstacles to working of any great extent have been encountered." (Illawarra Mercury, 1876).

In the initial years of opening the colliery got out 250 tons of coal, and employed 55 miners and 35 labourers and boys.

In 1880 Patrick Lahiff erected a smelting furnace at the foot of the incline to treat iron ore. He also made a small quantity of pig iron. Patrick also built two experimental coke ovens at Wollongong Harbour but failed from inexperience. Mount Pleasant Coalmine was acquired by Vickery interests of Mount Keira and ceased to function separately in 1934. Until that time it had a significant influence on the development of Balgownie and its residents both directly and indirectly (Francis, 1980; Illawarra Mercury, 1876).

When the Mount Pleasant mine commenced producing coal it was taken down the steep slopes of the foothills in sleds drawn by oxen. It was then transferred into carts and delivered to local customers. Sydney consumers also purchased coal which meant loading from Wollongong Harbour Wharf into small sailing vessels.

The Illawarra Coal Company took over the colliery and the construction of a tramway was most important to ensure the success of the company. It was decided to construct a line between the mine tunnel and the shipping wharf at Wollongong Harbour.

Patrick Lahiff took the project on board and it was due to his driving force and vision that the tramway began to take shape months before the authorising Act was ratified. The company opened their line to Wollongong Harbour in the same month that the Act was granted. The first coal transport ran over the line on 9 December 1862. It had 21 coal wagons drawn by five horses in tandem.

In 1884 the Locomotive "Illawarra No. 1" was run on the improved Mount Pleasant tramroad and its successful operation lead to the introduction of a second locomotive "Illawarra No. 2". The route of the tramway descended the slopes of Mount Keira and travelled in an easterly direction across the flat farming country lying between the foothills and Fairy Creek. The northern boundary of the farm known as 'Walkers' was the Kembla Extended coal mine tramway which ended at the Princes Highway. Balgownie residents frequently used the railway station that was first opened on 3 October 1888 as 'Para Meadow'; the name was changed to 'Balgownie' in 1909 and then the name 'Fairy Meadow' was adopted in 1956.

Balgownie lacked road in the early days and those that existed were in very poor condition. The few roads that were opened were described by the Illawarra Mercury in 1888 as "crooked as a dog's hind leg and about as narrow as a miner's liberality.." (Eardley, 1968; Fletcher, 1989).

The Balgownie Hotel was built in 1904 on the hill in Balgownie and served the miners from the Balgownie mine. It was built of local brick and rendered. It originally had an iron lace verandah which was removed when the breweries modernised the hotels on the coast. The parapet has ten short columns as features and an electric light plant was installed in 1908 (Ali, 1981).

The Balgownie Hotel was built in the Federation Filigree style typical of corner hotels in Australia at the time. "The lacy filigree wrought iron balustrade was a dominant feature which gave the building great visual appeal." (Illawarra Mercury, 15/6/2000 p. 15).

As the Victorian era progressed two storey verandahs became common and the Balgownie Hotel is an excellent example of this type. The hotel has had its verandah reintroduced and it is a reminder of the Balgownie Hotel's original grand architecture. 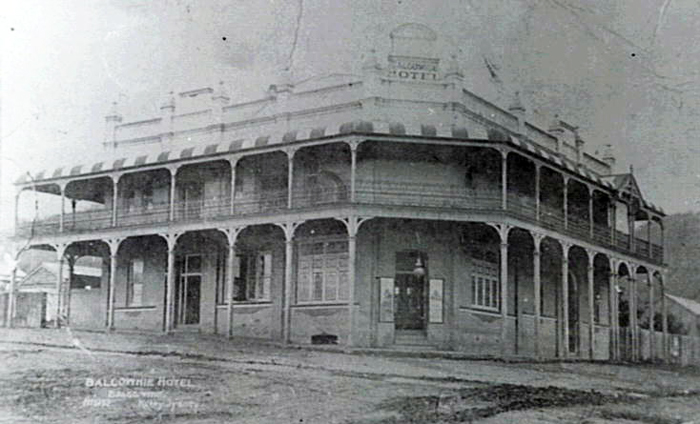 The great prosperity of the 1880s showed itself in exuberant building style as demonstrated by this shop front. It has a simple skillion roof and an elaborate façade of brick and mouldings (Ali, 1981). 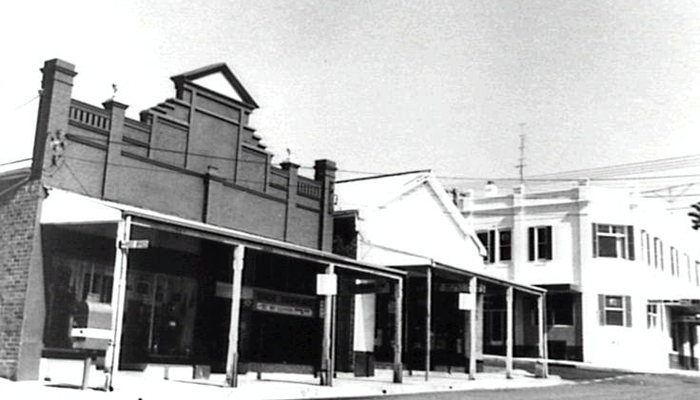 Balgownie is primarily a residential suburb of Wollongong. It is predominantly urbanised and only the steeper escarpment land is not developed.

The native vegetation of Balgownie was wet-sclerophyll forest with warm temperate rainforests and patches of subtropical rainforests within the gullies. "Most of the foothills have been cleared with only some remnant bushland and riparian stands remaining in the lower parts. Apart from selected reserves, the coastal plain is nearly all cleared of remnant vegetation, with invasive exotic plants constituting the majority of riparian vegetation." (Peterson, 2002).

There is still a large diversity of native species in the Cooinda Reserve. There are 16 specimens of Hibiscus splendens and a remnant riverine rainforest. The area was grazed by domestic stock for years which was halted in 1994 due to public pressure.

A thicket of lantana is preventing the resurgence of other species and this thicket which is punctuated by large trees dominates the landscape.

Many species of birds have been observed in the reserve including Kookaburra, Native Pigeon, Sulphur Crested Cockatoo, Mountain Lowry, Cat Bird, Eastern Whip Bird, Rufus Fantail, Magpie and Black Duck. Mammals include Echidna, Wallaby and Bandicoot. In the creek there are insects, Blue Yabbies, frogs and the fish Galaxia (Crowe, 1995).

Francis, Lorraine M., Balgownie: 1889 and all that, Keiraville, NSW: Wollongong Institute of Education, 1980

Ryan, Frank, My Balgownie: my recollections of my childhood in Balgownie, incorporating many memories of historical interest, [Balgownie, NSW] : Frank Ryan, 1984

Do have historical information, family stories or photographs of Balgownie ?