Brownsville is a small suburb near Dapto, in southern part of the Wollongong Local Government Area.

The area of Brownsville is a Wollongong City Council Heritage Conservation Area.

Brownsville was named after George Brown, who received a grant of 300 acres south of Mullet Creek in 1833.

George Brown's property was the original village of Dapto. It later became known as Brownsville when a new settlement began to develop around the railway station to the south.

George Brown was born in Fife and arrived in New South Wales in 1822, settling at Liverpool where he had an inn.

In 1833 George Brown received a grant of 300 acres covering the Brownsville area, south of Mullet Creek. He also received another 100 acres in 1834. In 1834 he transferred his 'Ship Inn' from Wollongong to this property and it became the nucleus of the original village of Dapto - now Brownsville (McDonald, 1976, Cousins, 1994). In 1838 the first inn burned down and a second inn was built and operated as the 'Illawarra Lake Hotel'.

In 1841 an Anglican Church was planned for two acres offered by George Brown for this purpose. "The first trustees were Gerard Gerard, Sheaffe and Arthur Marshall a Dapto storekeeper; Henry Osborne and William Jenkins were added to the list in 1843, in which year it was reported that the foundations had been laid.." (McDonald 1976, p. 45). By 1845 services could be performed and it was licensed by the Bishop of Australia. The first register of St. Luke's records baptisms to 1865, marriages to 1856 and burials to 1874. In time the original church needed enlarging and the Osborne family decided to build a church in memory of their parents. The Osborne Memorial church was commenced in 1880 and opened in 1882.

George Brown also secured most of the contracts when the Great South Coast Road was being constructed from just outside Wollongong to the Minnamurra River.

John McKelly received a 100 acre lot on Dapto Creek in 1829 as part of a series of veterans' grants. "In 1829 Surveyor Knapp was instructed to survey ten 100 acre lots for veterans on Dapto Creek (this being the first recorded use of the name Dapto), to select dry situations for the huts and to point them out to the commandant at Wollongong, Lieutenant Butler, who was to have a hut built on each grant by working parties. Each veteran was to be supplied with food for a year and to have a convict labourer assigned to him." (McDonald 1976, p. 24).

100 acres were also owned by Francis O'Brien and Augustus Hayward. These were possibly also veterans' grants in the Brownsville area.

William Beach was born in Surrey England in 1850. He came with his parents to Dapto in 1853. He began his sporting career in a wooden tub on the Macquarie Rivulet and ended it as champion sculler of the world.

Mullet Creek at Brownsville was sometimes called 'Beach's River' because it was there that he began his sculling career which culminated in the world championship. He began his career as a blacksmith. As an amateur oarsman, he won local fame in races against Tom Clifford on Mullet Creek and Lake Illawarra. He was encouraged by John Brown, George Brown's son and the unofficial Mayor of Dapto, to take his rowing further. This he did from 1881 onwards, rowing in professional races in Sydney. The next year he won the Australian Championship. On 16 August 1884 Beach met Hanlan, the Canadian world champion, on the Parramatta River in a three mile and 330 yard race. He beat him in the second mile and gained the world championship. "The time for the race was 20 minutes 28 seconds, the fastest time of record to that date. The excitement in Sydney was tremendous, but the excitement of Illawarra surpassed all." (McDonald 1976, p. 63).

Six times Beach successfully defended his world championship and in 1887 he retired undefeated. After a short time in Sydney he returned to Dapto and his home 'Champion Cottage' in Kanahooka Road until his death in 1935 at the age of 84. He was president of the Dapto Regatta Club, an Alderman of the Central Illawarra Council, a Trustee of the Dapto Showground and of Reed Park, and a director of the Dapto Co-operative Dairying Company. Beach was one of the town's most successful citizens.

John Brown was born on 2 June 1827 at Liverpool, New South Wales and came to Brownsville two years later. John took an active part in public affairs and local politics. John Brown inherited the flour mill at Brownsville from his father George in 1850. The mill fell into disuse after rust ruined the wheat crops in the district. It later became a cheese factory, and later still a butter factory.

John was an active participant in the movement which led up to the incorporation of the Municipality of Central Illawarra. The first election was held on 16 August 1859 and John Brown, Evan Robert Evans and Henry Hill Osborne were elected for Ward III. Brown served as an alderman, except for a break of one year, for over half a century. The new council had its headquarters at Dapto (McDonald 1976, Illawarra Mercury 1912).

John was a founding member of the Dapto Agricultural Society and gave up a large portion of his mill to hold the first Dapto Show in 1857. He also gave the Methodist Church a site in 1861 in his capacity as a councillor.

In the 1870s Brownsville was flourishing and according to John Brown in 1873 there were " the Illawarra Hotel, the Central Illawarra Council Chambers, a butchers shop and a smithy, Church of England and Wesleyan Chapel and other buildings and police station. " (McDonald 1976, p. 59). John Brown died on 15 August 1912, aged 85 years. He is buried at Brownsville in the cemetery behind the Anglican Church (McDonald, 1974, Illawarra Mercury 1912).

The transfer of the Ship Inn from Wollongong to Mullet Creek Farm in 1834 established the nucleus of the early town of Dapto. This inn became the centre of a busy farming community and when it was destroyed by fire in 1837 it was replaced by the Illawarra Lake Inn with George Brown as the proprietor.

In 1839 George Brown built a windmill where he would grind grain while customers waited, taking a percentage as a fee. This proved profitable and before long he had established a steam flour mill near his hotel. By this time a town had begun to develop around the mill which included a store, a post office, a Church of England church and cemetery, a Wesleyan Chapel and a Presbyterian school room. By 1856 the town had about half a dozen houses, a post office store, three churches, an inn and Mr Brown's flour mill.

In 1857 the Dapto Agricultural Society had its first show in Brownsville. The exhibits were shown in Brown's Mill and the hotel sale-yards were used for cattle, with a paddock at the rear of the hotel for horses.

Before the first Dapto Show the wheat growing industry in Dapto was in decline due to rust disease. In December 1856 the Illawarra Mercury had reported that "rust has destroyed a considerable quantity in some localities." (McDonald 1976, p. 51). By 1865 the wheat at Marshall Mount was so infected it was not worth reaping.

In 1873 the flour mill at Brownsville was operating only intermittently and a few years later in 1878 it had a fresh start as a cheese factory. This reflects the change of farming to dairying which became the primary industry in the Dapto district. In 1887, the year the railway opened, Brown's mill was transformed again into a butter factory and the Country Milk Company sent down two separators, which were very large and too big for anywhere but factories and the very largest properties.

With the arrival of the railway the centre of the township was moved south, leaving the original Brownsville with its old mill, hotel and its beautiful Osborne Memorial Church (Cousins, 1994).

The first Wollongong - Dapto road ran through Wyllie's flats until it crossed Mullet Creek by a ford near the showground, today's William Beach Park. The bridging of Mullet Creek was an issue in the 1850s with the creek being impassable when it rained. "In times of heavy rain, the waters of the creek rise suddenly to such a height and run with such velocity as to render it perfectly impossible to cross by any means except in a boat…" (McDonald 1976, p. 36).

In 1860 a site for the bridge was selected. The high banks close to the Dapto mill were chosen by the architect, Mr Weaver, as being the most suitable. In August the following year the bridge was opened, it was built of local timber and was 20 feet wide. It was hoped that this structure would be permanent but photos from later years show the ford still in use and another bridge under construction in 1890 (McDonald, 1976).

A road to Kanahooka Point had been proclaimed in 1861 but evidently was never used. In 1882 a new road along the line of the present Kanahooka Road was notified (McDonald, 1976).

The arrival of the railway in 1887 had a major impact on Brownsville. Dapto station opened in 1887 with the extension to North Kiama. The centre of the Dapto township moved south near the station and Brownsville became a separate entity (Cousins, 1994).

This building is prominent in the townscape. It is significant as a former hotel with historic origins and is of a rare and unusual style of renovation in the area. It is a two-storey Victorian Tudor style building with rendered brickwork, twin gables and it has an enclosed verandah between the gables.

The original license 'Ship Inn' in 1830 at Wollongong was transferred in 1834 to 'Brownsville's Ship Inn'. This burned down and was rebuilt in 1840 and named 'Illawarra Lake Hotel'. It is in good condition and there were some additions to it in 1888 (City of Wollongong Heritage Study, 1991). 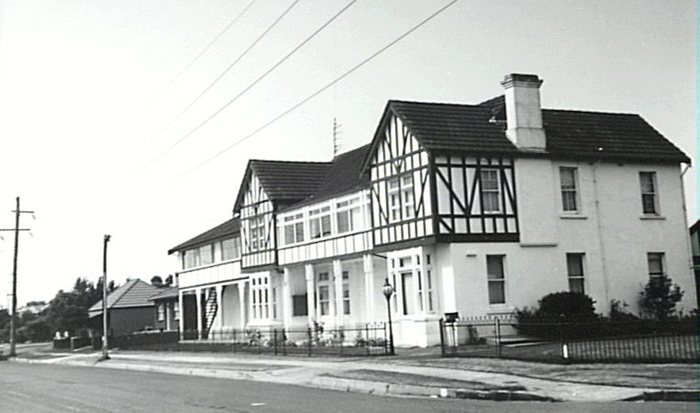 This is a simple early Victorian church building with cultural, social and historical value. It has Flemish bond brickwork made from local brick with a corrugated metal roof. The Nave has a small attached porch which has been recently added. It is a typical box like design in good condition; the point porch has been removed. 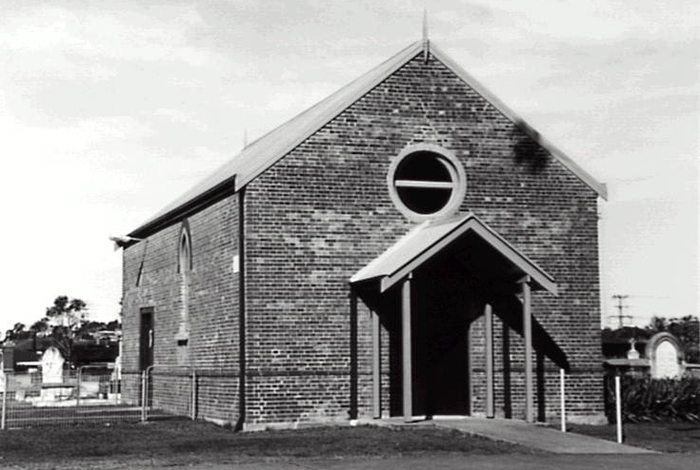 This cemetery is in church grounds. The land was donated in 1841 and the cemetery consecrated in 1848. The earliest grave was Eleanor Cole, 1855. This is the original cemetery at Dapto with strong historical and cultural associations in the area. It contains graves of many early settlers of the Dapto region (City of Wollongong Heritage Study, 1991). 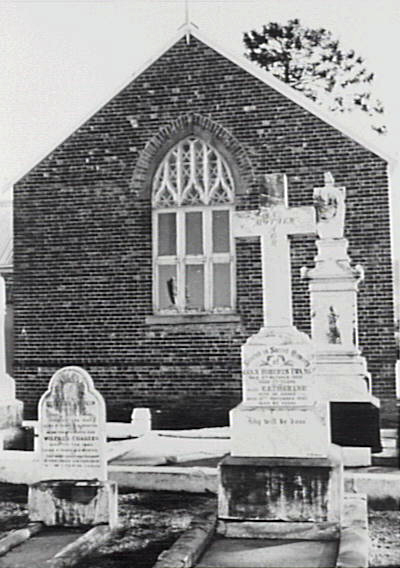 Brownsville's environment is dominated by Mullet Creek which runs through this suburb. A number of floods have been experienced in the Brownsville area, the largest in February 1984. This flood affected several houses in Brownsville, washing one off its foundations (Brownsville Flood Management Report).

Due to its limited size and its early settlement there is very little remnant vegetation remaining in the Brownsville area.

William Beach: [a collection of copies of newspaper clippings] from the album in the possession of William Beach’s granddaughter. [2 vols].

Do have historical information, family stories or photographs of Brownsville ?