Cringila is a residential suburb about four kilometres south of Wollongong. The suburb is bounded by Berkeley, Lake Heights, Warrawong, Five Islands Road and the Steelworks.

Cringila was the Aboriginal name for the pipeclay with which people decorated themselves before a corroboree or fighting expedition.

Cringila was formerly known as Steeltown, named after the collection of shacks and tents which were erected close to the Steelworks. In the late 1920s land was advertised in this area as 'The Steeltown Estate'. This land fronted Five Islands Road and adjoined the Hoskins Steelworks.

Cringila was part of a 1,000 acre grant made to Robert Jenkins. Robert Jenkins named his farm 'Berkeley Estate' but he never lived on the land. Jenkins died in 1822 after falling off his horse and the land was passed to his wife Jemima Jenkins. Jemima later purchased 2,000 acres to the west of Robert's grant and then five small parcels of land adjacent to this 2,000 acres. The name 'Berkeley Estate' covered all Jemima Jenkins' seven properties (Reynolds, 2001).

Michael O'Donnell and his wife arrived in Sydney from Ireland in 1841. He became teacher-in-charge of the Wollongong Roman Catholic Denominational School in 1842. In 1843-1844 O'Donnell and a fellow school teacher undertook the management of Wentworth's 'Five Islands Estate'. In 1853 O'Donnell leased the Estate from Wentworth with a proviso that he would clear 500 acres of the land. Evidence suggests that the O'Donnell family still held a lease with Wentworth in 1900. The O'Donnell's farm house was built not on 'Five Islands Estate' but on 'Berkeley Estate' (Reynolds, 2001).

The land for the 'Steeltown Estate' was probably purchased from the O'Donnell family. The subdivision extended from the southern side of Five Islands Road to just north of Fitzgerald's homestead. The southern extent of the subdivision is midway between Cringila Street and Fitzgerald Street. It is presumed that this was the boundary between the O'Donnell family's property and Fitzgerald's property (Reynolds, 2001).

Marcella O'Donnell, the third child of Michael O'Donnell Jnr, married Sidney Arkell and lived in Port Kembla. Sidney operated a trucking business and worked during the construction of the Steelworks. Marcella and Sid moved into a home on the 'Berkeley Estate'. This home was located on Birmingham Street on land the size of about six domestic sized blocks. Marcella and Sidney lived here until about 1940. After they left the house was moved to the edge of the block, and the block was subdivided into normal sized building blocks (Reynolds, 2001).

Paddy Fitzgerald purchased an old homestead and land from the O'Donnell family in the early 1920s. This land was located just inside the Berkeley Estate. The border between the Fitzgerald and the O'Donnell properties is approximately midway between the present Cringila and Fitzgerald Streets. Two of Fitzgerald's sons worked horses and drays on the Steelworks site during excavations for the blast furnace (Reynolds, 2001).

The early settlers in the area were dairy farmers and crop growers.

In the 1930s suburbs around Port Kembla, including Cringila, began to grow as people moved into the area to be close to their work. Cringila was a combination of two suburbs, the Steeltown housing estate which opened in the late 1920s and Belvedere estate which opened in the mid 1930s. In 1934 Charles Hippisley opened a mixed business and unofficial post office in Newcastle Street, Cringila (Reynolds, 2001).

In 1900 the Port Kembla area was relatively isolated because of bad roads. By the 1920s better roads had been constructed which meant that workers no longer had to cross lagoons or construct their own bridges to get to work. In 1940, however, the road between Wollongong and Port Kembla was still unsealed and crossed by unmarked train lines.

This residence was built in the 1930s in Cringila as a family residence. It was built from weatherboard, wooden frame and corrugated iron roof.

In the 1950s this residence was home to many migrant families who lived there a short time, and saved enough money so they could move to another suburb. This became a cycle for many families. The Campara family purchased the house in the 1960s because they could not afford a new house. They sold it in 1975.

The house was sold to a Cringila resident in 1994 and apart from the renovations done in 1975 the house is largely the same as it was in the 1930s (Local Studies Cuttings).

The Cringila footbridge was built in 1952 to provide access to Port Kembla Steelworks. It features a steel welded through Warren truss. Concrete decks were now standard for most new footbridges and for the replacement of timber decks.

By the mid-1930s welding had become an established technology, but railways were slow to use it for underbridges subjected to dynamic loads. However, for footbridges with light static loads, welding was ideal. Costly drilling and riveting was eliminated at joints by simple runs of welds, after an easy assembly of members. Initially double angles were used for the flanges but later, T-sections were used (NSW Heritage Office, 2004). 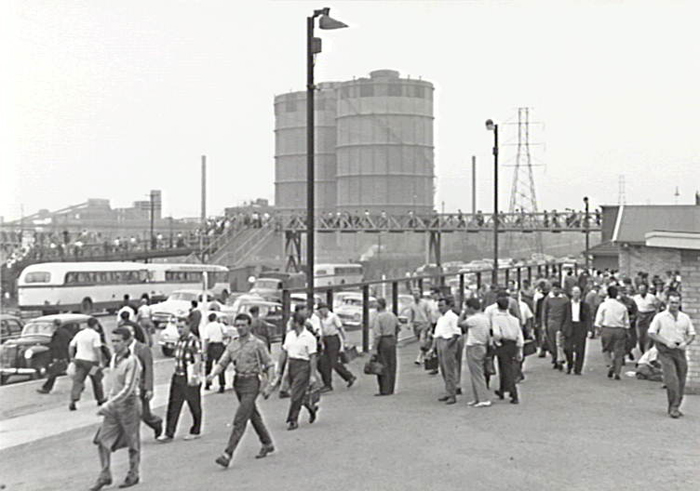 Cringila is a densely populated area containing the highest concentration of non-English speaking migrants in the Wollongong area. It has a diverse cultural heritage of approximately 20 nationalities. The suburb is surrounded on all sides by heavy industry. Air pollution from the emissions from these industries is an ongoing problem for Cringila residents.

In the 1970s BHP recognised the need to address the plant's impact on the environment and established long term goals to improve environmental performance. In 1976 the first five year pollution reduction program was put in place. Since then, there have been three further plans that aim to continually reduce the impact of industrial activity on the environment and residents who live in the region.

The Cringila Community Park has been developed by various groups and organisations to save and rehabilitate remnants of rainforests on the creek line at the southern end of the park. The park is a 78 hectare site purchased by Wollongong City Council after residents defeated a proposal by BHP to use the land as a coal dump.

'Save the bush' grants have been awarded to help with the rehabilitation of this area. Weed control, planting of native trees (turpentine, boobkilla, and wattles) and construction of paths has been undertaken in this area. The long term objectives of the park management is to:

Cringila has been changed into a vibrant community-minded village. A large entry wall has been erected to welcome visitors to the village, the main street has had a facelift and tree planting has been carried out in all areas of the suburb (Local Studies Cuttings File).

Southern, J.L.N., A Railway history of the Illawarra: the history of rail transportation at Australian Iron and Steel Pty Ltd, Port Kembla, New South Wales together with an account of the development of railways and shipping ports in the Illawarra region, Melbourne: Broken Hill Proprietary Co. Ltd, 1978.

Do have historical information, family stories or photographs of Cringila ?