Thirroul is a large town centre in Wollongong's northern suburbs, between the escarpment and the ocean.

In the 1870s when settlement of the area began, all the area north of Wollongong was known as Bulli, and Thirroul was called North Bulli. Before Eurpoean settlement, Aboriginal people belonging to the "Thurrural" tribe roamed this area. There were many different ways of spelling the name which translates to "the place or valley of the cabbage tree palms".

Robbinsville was a former name for the village of Thirroul. The village was called Robbinsville after Frederick Robbins, who owned land in the area. The name was adopted at a meeting of inhabitants of the area in February 1880.

From the Parish map for the area, it appears that the first land grant in Thirroul was made to Samuel McAuley (later referred to as McCauley) on 1 June 1855. Other original land grantees were Joseph Roberts, James Holt, Jane Rose, Thomas Rose and David Ballantyne (Map of the Parish of Southend, County of Cumberland, 1921).

Samuel McCauley arrived in Sydney from Ireland in 1838, after which he immediately came to the ‘Five Islands’ as the Illawarra was then popularly known. From the time of his arrival, he never lived outside the Illawarra area.

For the first five years after his arrival, he lived on the Berkeley Estate where he was one of several settlers who cleared and cultivated the property. He left there to buy and settle on a farm in Thirroul, then known as North Bulli. The McCauley land extended from the beach to the railway line, adjoining Bulli Pass and north to Fords Road.

Samuel McCauley was one of the oldest residents of the Illawarra district when he died aged 85 in June 1899 at his home in Thirroul. He was survived by his wife aged 84. They had three sons, two daughters, 57 grandchildren and 38 great-grandchildren.

"...The deceased was a true type of the grand old veteran colonisers who faced the wild woods of the country in the early days with strong hearts and hands and subdued the land for the convenience, advantage and enjoyment of succeeding generations." (Obituary, Kiama Independent, 29 June 1899 p.2).

In 1906 the first land in Thirroul to be advertised for auction was submitted under the name of 'MacCawley Park Estate' (Gray, 1994).

Frederick Robbins was a prominent resident who gave his name to the township of North Bulli as at was then called. Other suggestions for a name included Southend, Newtown and flippantly, Mudmire, but they were defeated by Robbinsville. The Department of Railways petitioned for the name of Robbinsville to be changed to the original name of Thirroul, and this was granted in 1891.

Frederick was made the first postmaster of Robbinsville in 1888 after, along with other residents, lobbying the government to supply a post office and railway platform.

He was also actively involved in local meetings, particularly those of the New South Wales Public School League. He was reported [Ilawarra Mercury, 14 July 1888] to have sold one acre of his land, "well situated and elevated, being the centre of population", to the Department of Education for the purpose of building a school and teacher’s residence. The school subsequently opened in 1889 with 154 children on the roll.

At a public meeting on 31 October 1879 it was resolved to favour a "universal and uniform system of national education; that aid should be withdrawn from denominational schools" and that "primary education should be national, secular, compulsory and free". Frederick Robbins said, "many children yet unborn would have cause to bless the perfecting of such a system in this country". (Illawarra Mercury 13 November 1874, 4 November 1879, 24 February 1880, 24 April 1888, 14 July 1888).

Cedar logging began along the escarpment from Bulli and to the north in 1890. The logs were sawn up on the spot and taken by horse and dray to Parramatta for sale. Most of the timber was removed by the 1850.

Whaling operations were in progress by 1817 and boiling down works had been established at Sandon Point. Whaling never really flourished here as whales only pass at certain times of the year, making it a seasonal operation.

Cornelius O'Brien settled on Sandon Point in 1817. He was a very resourceful man who farmed and also built boats for the whaling industry. Evidence of his boat building activities in Hewitt’s Creek were still visible in modern times, but not much research into this activity has been done.

Tourism was the first real industry in the Thirroul area. This was due to the construction of the railway, beginning in 1882 and completed from Kiama to Sydney in 1888. This made the area easily accessible to people from Sydney and Robbinsville, as Thirroul was then still known, became a popular family seaside holiday destination with boarding houses and holiday cottages in demand. This changed when the coal mines and the railway marshalling yards came to the area, and tourists chose to spend their holidays in neighbouring Austinmer, where a seaside holiday atmosphere remained.

In 1912, Mr T Horan, postmaster, erected an open-air theatre, King’s Theatre, in Thirroul. It had a canvas roof and canvas deck-type chairs. The name was changed to the rather grand ‘Crystal Garden Pictures’ in 1915, still without a proper roof. It became the summer picture show, while the School of Arts used it in winter.

Coal was first discovered in the Thirroul area in a creek bed off Ford’s Road in 1895. Five years later, John S Kirton opened Excelsior No 1 Coal Mine at this spot and the coal which was extracted was sold locally. In 1905 Excelsior No 2 was opened at the top end of Phillip Street. Initially coal was hauled to the surface by pit ponies but as the mine progressed, steam driven steel ropes were installed. The coal was then transported to the rail line at Kennedy’s Road by incline in skips. Once empty, the skips were returned to the mine by steam driven tailed ropes. However, pit ponies were still used underground until the mines were mechanised in the 1950s. Excelsior Mine closed in 1962.

Thirroul Brickworks was the common name given to the 'Vulcan Silica Fire Brick Company' which started to manufacture bricks in approximately 1920. In 1938 it was sold to Newbolds Industrial Refractories and the bricks were in great demand for use in gas retorts and furnaces. In 1974 Newbolds were taken over by Australian Industrial Refractories, increasing the number of employees to about 300 with a much greater output. BHP has been in charge of the company since 1991 (Gray, 1994; Parkinson, 1994).

Dr Charles Throsby cut the first track down the escarpment in the Bulli vicinity in 1815. This track was in use until 1844 when Captain Westmacott found another route up Bulli Mountain in approximately the same vicinity as today's Bulli Pass (Illawarra Mercury 31 December 1998 p.11),

By 1880 maps showed the main South Coast Road from Sydney to be via Campbelltown, down what is now known as Bulli Pass, Mount Ousley road not being built until 1939. In 1925 the Main Roads Board was formed and improvements to sections of the Princes Highway were begun. The section of road which followed the coast from Bulli to the top of Bald Hill was named Lawrence Hargrave Drive after the famous aviator from Stanwell Park (Wollongong History Highlights, 1983).

Construction of the first section of the rail link between Sydney and the South Coast began in 1882. By 1884 the Illawarra Line as far as Hurstville was operational. By 1886 the line to Loftus opened and buses began to operate, completing the Sydney to Wollongong journey. The complete link-up with Sydney was made in 1888, and the double rail line came in 1892 (Gray, 1994).

Steam ships carrying coal made their way up the coast to Sydney and further afield as early as 1863. Most of the Illawarra’s early coal was shipped from Bulli jetty which unfortunately did not offer enough protection for ships moored to it. Several vessels were washed ashore during storms and wrecked. In June 1864, 250 feet of the jetty was washed away and mining in the area came to a halt.

Ships also brought new settlers, cargo and supplies in and out of the area. For example the locomotives for use on the Kiama-Clifton run were transported by ship to Wollongong Harbour (Wollongong History Highlights, 1983; Gray, 1994).

This large two storey rendered masonry and fibro corner building is a significant townscape element in the main Thirroul street, displaying Federation Free-Style elements. This building, erected in 1912 by Mr Horan, the then postmaster, was an open-air theatre with a canvas roof.

It is considered to have rarity, landmark and representative value as well as cultural, social, architectural, townscape and aesthetic significance.

The theatre was bought and renovated by John Comelli, who renamed it 'Anita's Theatre' after his late wife. Anita's Theatre opened in 2007, and regularly hosts concerts and live performances. 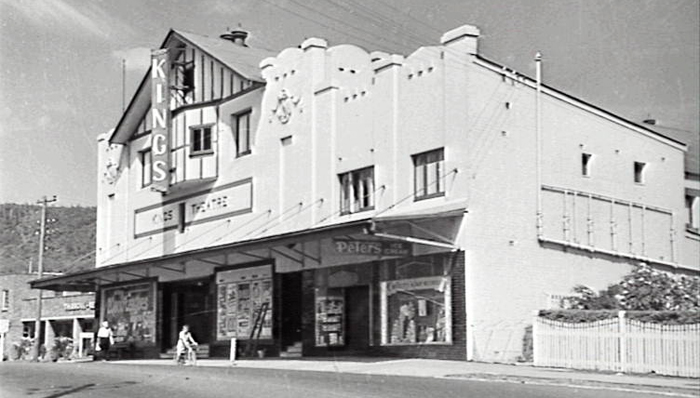 This building is a weatherboard Federation Carpenter Gothic church hall with entrance room and a simple metal pitched roof. This former church is one of a few surviving buildings of Thirroul that date to the early 20th Century. Built in 1911, it forms an important element within the townscape. It has representative, cultural, social, architectural, townscape and aesthetic value. In 1977 the building became socially significant for local people as a community centre. In 2011 the building was converted into its current use as a Post Office. 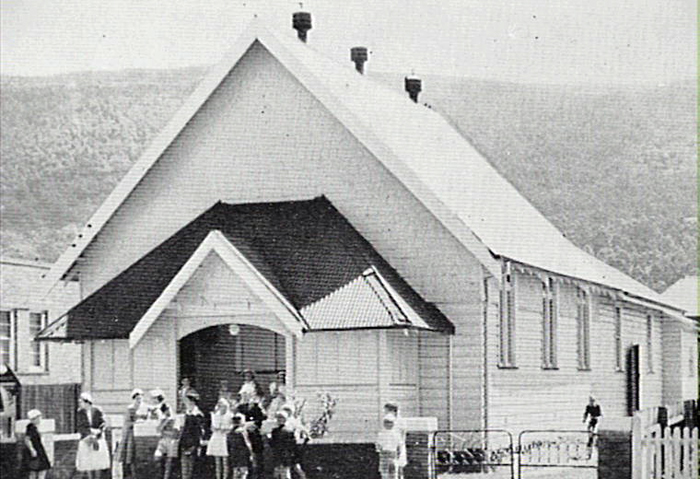 Thirroul lies between the Pacific Ocean and a section of the Illawarra escarpment known as Lady Fuller Park. It is adjacent to Bulli Pass Scenic Reserve.

Cabbage Tree palms were once plentiful in the area. These trees were highly prized by both Aboriginal people and European settlers. They have diminished with development, although some still grow along the escarpment and the sides of Bulli Pass.

Early settlement began on the hilly area of the village as the lower beachside area was swampy and susceptible to flooding when high tides combined with a period of heavy rain (Gray, Lenore, History of Thirroul, 1994).

The flora in the area belongs to the subtropical / warm temperate rainforest group, termed Mixed Notophyll Vine – Fern Forest, and occurs on the level sections of the escarpment where the soils have developed an accumulation of moisture and nutrients. On the upper slopes of the escarpment, Coachwood Rainforest is found.

The underlying geology is generally the Illawarra Coal Measures or sometimes the Narrabeen Group.

The escarpment area is rich in its variety of bird life. Regularly recorded birds in the northern suburbs of Wollongong in summer include the Australian King Parrot, Crimson Rosella, and the Brown Gerygone, perhaps the most common small brown bird in the Illawarra rainforest. The Channel-billed Cuckoo and Pied Currawong are most often found in or near fig trees which provide their favourite food. Honeyeaters and Satin Bowerbirds commonly visit gardens adjacent to the escarpment. The Green Catbird is not as common but still well distributed throughout the district (Mills, Kevin & Jakeman, Jacqueline, Rainforests of the Illawarra district).

Do have historical information, family stories or photographs of Thirroul ?