Woonona is a suburb in the north of the Wollongong Local Government area.

There are several explanations for the derivation and meaning of Woonona:

A grant of 1,920 acres from Towradgi to Woonona, taking in Corrimal, Bellambi and Woonona Flats, was granted to R and C Campbell by Governor Gipps on 30 April 1841. This was a promise of grant by Governor Darling to "Miss Harriett Overington, now Mrs Spearing" on 3 March 1827. This grant was a long irregularly-shaped property (Portion 113, Parish of Wonona), sometimes referred to as "Bellambi" or "Palamba" but extending from Towradgi to Woonona (Paulsgrove Diary, 1988).

Other smaller grants in the area included those to Robert Marsh Westmacott, Patrick Callaghan and John Kelly (Lindsay, 1994).

Henry Fry was born in Bath, England in 1829. He arrived in Sydney as a free settler in 1854. Fry opened the first general store in Woonona in 1857 and the first Woonona Post Office in October 1859. His store was in a central spot and a tramway ran through his paddock. Henry Fry remained Postmaster until 1 August, when he sold his store and Edward Ramsay Jnr was appointed Postmaster.

Ramsay was dismissed because of irregularities in his official accounts and Fry was reappointed Postmaster on 11 August 1881. It was Fry who decided that his adopted home be named Woonona, an Aboriginal name for a nearby mountain peak. He married Elizabeth Jones in 1862 and lived in the Woonona-Bulli district until his death in 1907.

Henry Fry was a magistrate of the Bulli Court House from 1873-1898, a life member of the Bulli Cottage Hospital, President of the Woonona School of Arts and Chairman of the Progress Committee and Park Trust of Bulli (Local Studies Cuttings File).

The Woonona Mine was opened in 1857 by Thomas Hale, on property owned by Henry Osborne. Hale was the first man in the district to erect a deep water jetty to ship coal at Bellambi Bay. Thomas Hale promoted the superior quality of Illawarra coal far and wide, sending samples to England and having them tested. He also sent coal to China for the first time, and it was not long before Illawarra coal became the preferred import of the overseas markets. Cargoes of coal were sent to California as well.

The Woonona Colliery was closed in 1863 due to the deteriorating financial situation experienced by Thomas Hale and Henry Osborne. Thomas Hale died in 1883 (Local Studies Cutting File).

James Pallier was born in Woonona in 1894. He served his apprenticeship as a plumber with Jack Colles and after gaining his trade certificate he commenced business as a licensed plumber in Woonona. This business continued for 45 years. In 1955 James Pallier established the firm J E Pallier & Son Pty Ltd at Princes Highway, Woonona to specialise in the manufacture of sheet materials for the plumbing trade. Mr Pallier was also a member of Wollongong Rotary Club for many years, and during World War II helped to raise much-needed money for The Red Cross, War Chest and Comfort Funds by organising regular gymkanas in Nicholson Park, Woonona. Mr Pallier died in December 1963 (Local Studies Cuttings File).

James Downie was born in Falkirk, Scotland in 1835. He married Margaret McCann and came to live at Woonona in 1856. In the same year he commenced business as a blacksmith at Woonona. There were six sons and six daughters from the marriage and all the sons followed the occupation of blacksmith. James Downie died at Bulli in 1908 (Local Studies Cuttings File).

Thomas Ball was born in Shewsbury, England in 1852. He migrated to Australia in 1878, first settling in Wollongong. He worked as a miner for several years, then took on road contracting and was a general carrier in the Woonona district. Eventually he became a manufacturer of cordials. Together with his wife Hannah he operated the Steam Cordial Works and was also proprietor of the Royal Hotel at Woonona, which remained his property until his death in 1928. Thomas Ball was a foundation member of the Woonona Bowling Club (Local Studies Cuttings File).

Large amounts of cedar grew underneath the Illawarra Range. This cedar was drawn by bullock teams from the mountain side to the beaches where the cedar logs were winched on to the sailing ships which anchored beyond the breakers. David Charlesworth Snr was issued with one of the first Cedar Licences in April 1835.

In 1857 Thomas Hale of Woonona opened the Bellambi (also called the Woonona) coal mine. The mine was three-quarters of a mile up the mountainside in a seam eight feet thick. A bush track was cut to the mine and the coal ran down the mountainside on a shoot. Horse-drawn drays then loaded it and transported it to Bellambi Harbour. Hale's mine closed in 1863. It was eventually re-opened and the Woonona and South Bulli collieries were connected underground and operated by Bellambi Coal Company (Bayley, 1956).

The Society was established in 1897 with its head office in Woonona and branches in Scarborough, Coledale, Thirroul, Corrimal, Balgownie, Wollongong and Port Kembla. The head office included shopfronts, extensive warehouse facilities, a cordial factory, tearooms, bakery and stables for the delivery horses.

The Co-op sold fresh bread, cakes, vegetables, clothing, electrical goods, crockery, kitchenware, furniture, haberdashery, manchester, garden supplies, chaff, wheat, tools, kerosene, building materials and cement. Orders were collected from homes and delivered by horseback until the 1940s, and then by motorbike. Large orders were delivered by horse and cart and later by delivery van (A History of Wollongong, 1997).

Woonona crossing signal box was opened in 1889 to control the crossing on the level of the railway between Model Colliery, Woonona and Bellambi Point Jetty. Although the Model Colliery closed down in 1903, the private line was used by Pendlebury's Brickworks on the Bulli Road. In 1940 Pendlebury's Brickworks abandoned rail transport and the line was closed. The Woonona signal-box was permanently closed and removed in 1941.

Woonona platform was opened on the western side of the single line in 1919 at the Park Street level crossing. A second platform was added opposite in 1923 (Singleton, 1972).

Rixons Pass was completed in 1858. In 1859 it was reported that Charles Throsby Smith ascended Rixons Pass in a gig with no difficulty and "without having to alight once" (Illawarra Mercury, 2 September 1858; 14 April 1859).

The Post Office building was designed by Walter Liberty Vernon, a government architect. It is a single storey brick building with a corrugated metal roof. The post office was built in 1903 by G E Frazer using local brick. The building was completed on 23 September 1903 and was officially opened on 28 September by the Hon. George Fuller MP.

This building is currently being used as a Pre-School Centre and the current post Office is now located in the eastern side of the Princes Highway (City of Wollongong Heritage Study, 1991). 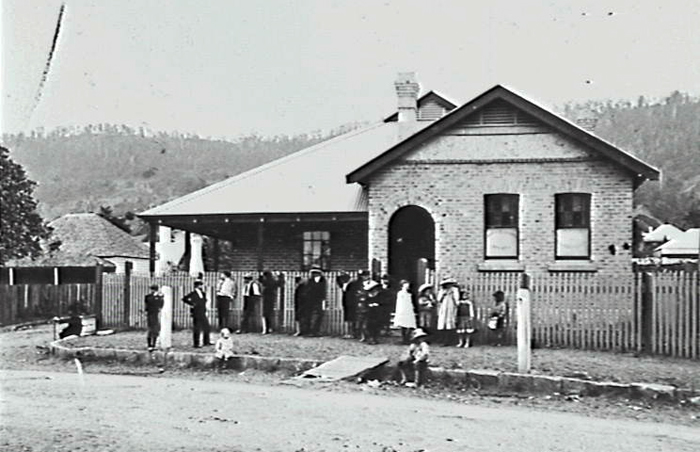 Woonona Infants School was built in 1890. Another large classroom was added in 1902. It was a single storey brick building with a corrugated metal roof in simple Federation style. The block was destroyed by fire and replaced by brick veneer block facing Gray Street in 1965.

Another infants block was completed in 1927 and the original 1884 school was then demolished. The new block was a two storey brick building with tiled roof, Inter-War Stripped classical style (City of Wollongong Heritage Study, 1991).

This is a large two storey rendered brick building with an ornate parapet of moulded decoration. The Co-operative Society (est. 1886) began baking bread in 1904 and made as many as 40,000 loaves a week. The Co-operative was headquarters of the Coast Co-operative society which had 3,000 members. It is an unusual commercial landmark building of simplified and eclectic Inter-War Spanish mission style (City of Wollongong Heritage Study, 1991).

The original building was built in 1862 on land purchased by John Sommerville, Thomas Hale, William Sommerville and John Collaery. This building stood until 1935, when the trustees at the time built the present premises, which is a single storey brick and tile building. There was a large hall, a reading room, library, two meeting rooms, a billiard room and a kitchen (City of Wollongong Heritage Study, 1991). 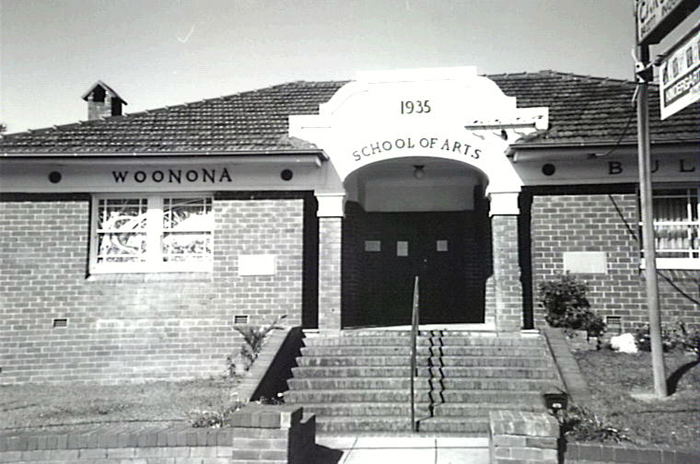 The sequence of sedimentary rocks in this district is Wianamatta Shale, Hawkesbury Sandstone, Chocolate Shale, Narrabeen Sandstone, Upper Coal Measures. The influence of parent rock and topographic shelter is very apparent on the type of vegetation that grows in different areas of the district (Davis, 1936).

The Escarpment in this area supports good quality stands of Eucalyptus and rainforest. Unfortunately, extensive clearing and bush fire damage behind and north of South Bulli Colliery as far as Woonona Heights has degraded the area. Wet sclerophyll forest is found on parts of the eastern slopes from Rixon's Pass to Bulli Pass Scenic Reserve (Gordon, 1985).

Pied Currawongs are common birds of the forests of the district. At Woonona, on the edge of the escarpment forests, this species has bred for several years in the same tall eucalypt tree (Mills & Jakeman, 1995).

Do have historical information, family stories or photographs of Woonona ?